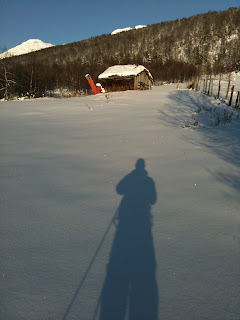 The weather forecast made me stay an extra day in Hemsedal. Waking up to blue skies I didn't regret my decision. Today’s planned trip was Svarthetta, about 700-800m climb from the parking.

During the night the temperature had dropped to -4 C giving perfect conditions. Heading up from the lower part in the shadow to the sun higher up it turned gradually warmer. Ski touring in November isn't like mid winter. The sun is still warm and without wind I could enjoy the winter landscape. Since I probably was the first doing Svarthetta this year, I had to break trail all the way.

Approaching the high mountain through the trees I followed the tracks form a fox who probably walked just minutes before me. The day turned out to give me close accouter to both grouse and a reindeer. The reindeer I first detected heading up. From a distance I couldn’t tell if it was a stone or animal. It was standing still without making the smallest movement. When skiing down I had to checkout the place. To my surprise I almost skied over the animal lying half buried in the snow. I think it was as surprised as me...

The skiing down were partly great, despite the latest snow had just briefly covered the rock base. Into the woods I could relax and cruise between the trees.

To conclude the day had all what you can expect from a day out, great snow, wildlife and blue skies. I must say I love my new office:-) 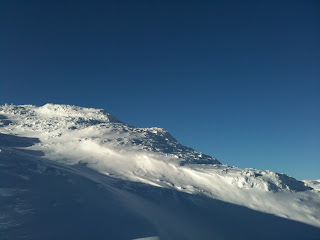 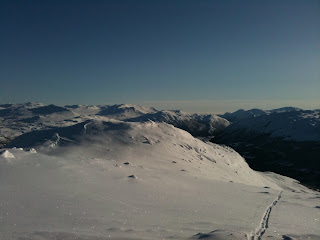 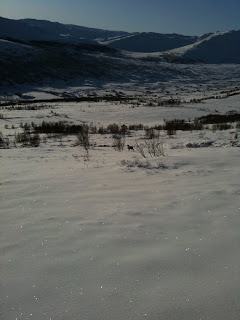 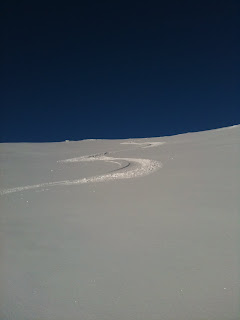 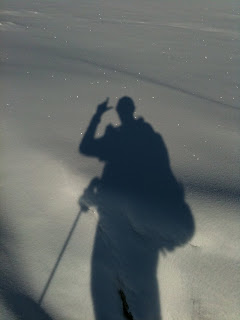 An afternoon stroll in a meter of pow! 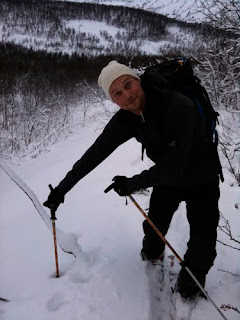 I got reports of heavy snow last week, but not in my wildest dreams did I expect this much snow on my first trip this season!

My friend Jan Andre and I headed out for a short trip to check out the snow. Actually Jan who lives in Hemsedal already had his first turns 4 weeks ago. No one could miss that as he was bombing us with MMS and Facebook pics. That was extraordinary early and long forgotten as mild weather had turned most of the first snow back to water.

Today we had decided to go to one of the safe spots in Hemsedal, Nibbi. Arriving we quickly concluded that Nibbi wasn’t ready for us yet. A bit disappointed we headed up to the road pass towards the West of Norway (Lærdal). On the way we discussed were we could expect snow. Since Jan had spent the last week in bed with the o so famous “honk honk flu” he had not paid much attention to the direction of the weather. But with some local knowledge after skiing this mountains for the last 28 years we quickly started analyzing the North-West flanks. And right so, YES! Look there it is!

In between the open Burch woods the snow seemed to be good enough for a test run. After some fumbling with the skins we were again heading upwards.

Last year Håkon and I had our debut Nov 8th, and today it’s just Nov 6th. The difference was that last year opening where on frozen summer snow in Norway’s high mountain area Jotunheimen. Today we are in fresh powder far from the “summer”. One meter above actually!!

We made the trip short as the day where turning into night, but what a debut! Going down we made girly sounds, a lot of yeeeeeeeiiiiiiihhhhhhhhaaaaas and our smiles probably will stay on until morning! 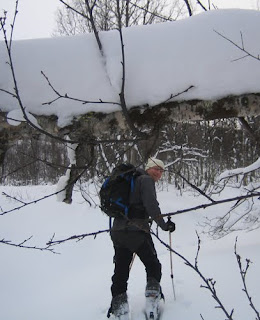 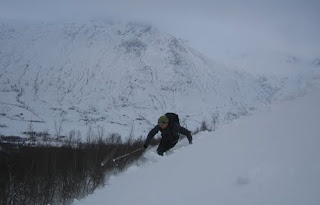 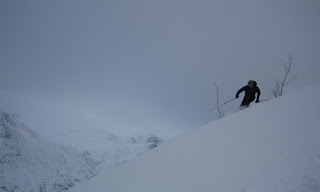